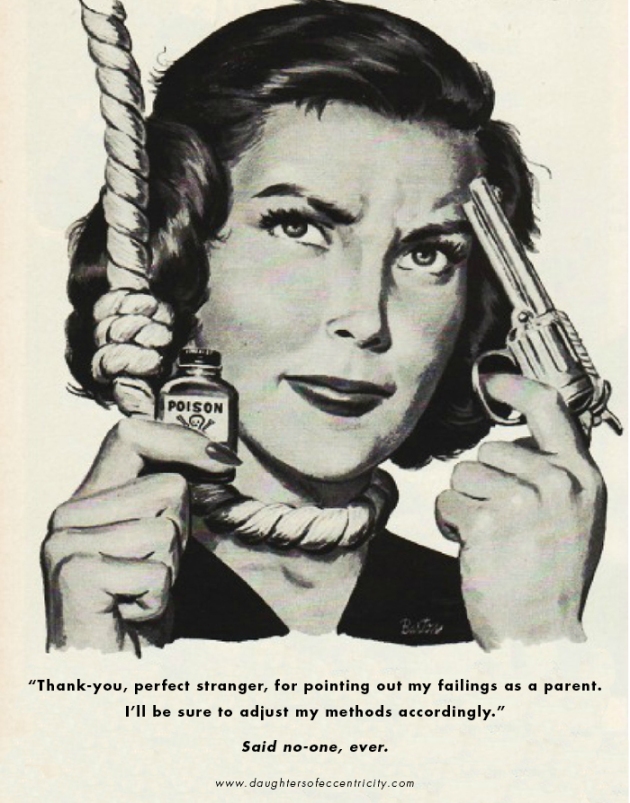 Yesterday I went out and about with the kids to a shopping centre. Standard.

I was pushing Freddie in the pram while Hazel walked/skipped/ran/slouched along next to me. I passed a pop-up stall with some really cute kitten slippers so, naturally, I picked them up, asked for a size and chatted with the stallholder. Suddenly I felt a tap on my shoulder and turned around to see a middle-aged lady with a concerned look on her face who said: “I don’t want to tell you how to be a mum, but you should be careful turning your back on your baby. You heard about the baby kidnapped… from…” she tapered off, probably trying to recall which baby horror story she was referring to, perhaps realising she was actually thinking of an episode of Law and Order. I stood looking at her a bit dumbfounded. I couldn’t have been more than 15 centimetres from Freddie, the pram was practically touching my coat. The brake was on. Random clothing and other bits and pieces were hanging from the handles and shopping was messily and precariously piled in the basket underneath. Freddie was fast asleep and strapped into the capsule. And the exits were a fair way off. And there were a lot of people around. Hazel was standing in the way of any clear path out of there. And my pram is kinda hard to push when you first take the brake off… and I could probably go on and on and on about how awkward it would be for any would-be kidnapper to steal this particular baby right now, whichever way I was facing. But I’ll stop there.

We new parents have a lot to deal with.

There’s the baby, for one. They’re a handful. What with the crying and the pooping and the sleeping (or not sleeping) and the feeding (or not feeding). Who designed them to be so difficult?

Then there’s the rest of the family. Your spouse, perhaps another kid, your extended family. Lots of people need to be thought about when a new baby comes along. Relationships can change. Kids definitely change. Sometimes it’s for the better, sometimes it’s really challenging.

Then there’s your body. And that… I can’t even…

You see, it isn’t the point they’re trying to make (I don’t doubt that someone somewhere sometime had their baby stolen from a shopping centre and that it was awful). It’s that these vigilante do-gooders don’t realise that their input is utterly irrelevant, out of context and potentially damaging. If pressed, my nosy stranger would have claimed good intentions; that she was saying it for my own good. But this simply isn’t  true. She was saying it for the feeling of being right, being validated, being important, being wise. She was expressing her own deep-set fears and anxieties, her own agenda. But it is misdirected: there are far fewer babies being kidnapped in shopping centres than there are brand new mums falling into the despair of post-natal anxiety, convinced they’re doing everything wrong. If she really wanted to do something for my own good, maybe just… don’t.

What makes it all so incredibly ironic is that in 2014, we have found ourselves living in an empathetically disconnected world. Where people rarely look up from their iPhones on public transport to offer their seats to the elderly. If someone starts a racist rant on the street, people desperately look the other way rather than speak up. But a frazzled mum gives her screaming toddler a lollipop in the supermarket and hell hath no fury like a complete stranger who just read I Quit Sugar.

So, vigilante strangers everywhere, I say this on behalf of every new parent:

It actually doesn’t matter what you say. We’re not going to listen to you. We’re not going to like it. We’re sure as hell not going to act on it. (I have never once known a person to say to me “A lovely stranger told me off for taking my baby out in public today and I’m so glad she did! I’ll be sure to stay indoors for the next few months because random strangers on the street are universally known to be right.”) We’re not going to thank you. At best, we’re going to ignore you and if you see us playing with our phone afterwards then we are most DEFINITELY ranting about you on Facebook. So why bother? Resist the urge to scold and just shut up.

I don’t ask you to shut up because whatever it is you’re pedalling isn’t sage advice. I ask you to shut up for the plain and simple reason that you are a complete stranger, with zero knowledge of the baby or parent or situation in front of you and you should therefore please just shut up.

So the next time you’re out and you spy a parent ‘doing it wrong’ and you’re just itching to be helpful, take a deep breath and say the following:

“Your baby is beautiful.”

Believe me, you don’t know what kind of day that parent is having and saying that WILL help, if only in a small way.

And if you just can’t bring yourself to do that, go for the Do No Harm approach and please shut up.

I say this for your own good.

(This whole scenario ended with me turning my back on the nosy stranger in the hope that someone would kidnap her.)

One thought on “Stranger Danger”